Now, when this hot summer seems to let us breathe and the weather slips slowly until fall, the Vía de la Plata (Silver Way) gets the hustle and bustle of pilgrims again, looking for their own way to Santiago. Zafra, in the south part of this route, is the perfect spot for a rest on the road.

Mozarabic Way, this one which goes across the Peninsula from South to North, is the original way.   According with one of the most famous theories about the origin of the way, Saint James’ disciples arrived in Seville and took his corpse to the end of the known world, to Finis Terrae, using the same paved road built by Romans for military and commercial purposes.

This road was full-equipped for traveller’s necessities and medieval pilgrimage gave it a new dimension. In the 20th Century, the societies of the Friends of Saint James revived this way for walkers and pilgrims. 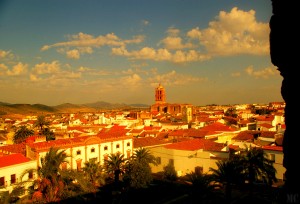 In this context, Zafra takes on importance as a commercial hub in the Middle Ages: medieval pilgrims could find a market in the current Plaza Chica, where get some supplies, a new pair of boots o a blanket. Next to this market it was Saint James’ Hospital, that provided health attention and cares.

Zafra is between Medina de las Torres and Villafranca de los Barros. Medina was a roman mansio (Contributa Iulia), the main city of the Celtic Baeturia, but it was replaced by Zafra because of the rising of the House of Feria. During 16th and 17th centuries, this aristocratic family increases its power and several congregations were settled, building churches and chapels, convents and monasteries.

Santa Clara Convent. It is still inhabited by noons, and they sell spectacular craft sweets

The Way runs through the town, from the railway station, going across the heart of the town to the opposite exit to Los Santos de Maimona. This nice walk shows Zafra to the pilgrim, trekker or mere tourist, who can find shops, banks, health care and all they can need to keep walking.

In addition, if you want to stop along the Way, there are some hotels and two pilgrims’ hostels. One of them is run by the Asociación de Amigos del Camino de Santiago de Zafra, and the other one, located in the old Convento de San Francisco, is property of the regional government.

Either passing through Zafra, or planning to stay some days, the pilgrim, now as in the old days, should drop into the Plaza Chica, turn off for a while the row of yellow arrows that mark Saint James’ Way and fuel up at La Tertulia. Enjoy local produces and good meals: chickpea stew, for instance, to get their stamina back; a refreshing salad, some cheese or ham, seasonal produces and a glass of good wine.

Stopping, sitting, enjoying the atmosphere, the company or the silence. Let the bells ring up in the tower, the shallows and storks draw the sky, and the locals go up and down in front of their eyes. 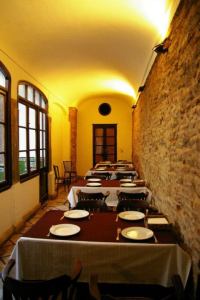 Our dinning room. There is a brazier under each table for cold days, and it is soooo cosy!

And maybe if the weather is not fair to you, hiding under our table blanket, letting our braziers be good to you and take care of your suffering pilgrims’ feet. Because, you know, “Se hace camino al andar“.

August, a long, long, looonggg summer. The thermometer is still showing 35ºC at 10:00 pm, and a scented steam raises from the garden, smelling like wet soil and tomato plants. An unmistakable summer perfume that will become red taste on the table, sweet but not sweet and salty without salt. A strange taste, hard to describe and even harder to find at the supermarket. A tomato.

A bit of History

Native to Central America, tomato travelled to Europe from Tenochtitlan, Aztec capital city, where it was called xitomatl: ‘fruit with a navel’. But for long years, even centuries in some places, it was only a decorative plant, because it was thought to be toxic.

However, from XVI century it became a must of Italian and Spanish cuisine. Sauces, gazpacho, soups, salads or just fresh tomatoes with a bit of salt and olive oil, it has always be part of our menu since then.

We can say that tomato is the perfect food. Beside of its taste and the hint of colour that it gives to your dishes, it has an endless list of attributes. Tomato contains lots of vitamines and minerals, but its most outstanding feature is the combination of vitamine C and lycopen, a kind of carotene that gives tomato its red color. They both are two of the most powerful known antioxidants, protecting cells against the oxidative stress that causes cancer, cardiovascular illness and skin ageing.

Lycopen is liberated when tomato is cooked, and when it gets in contact with some fatty acids, as the ones in olive oil. So that, tomato sauce, stir-fry and even ketchup are excellent anti-age solutions. In adition, tomato mineralizes our bodies and is a really good diuretic. It helps to expel uric acid and provides only 20 kilocalories per 100 g. So it is perfect for any diet.

We are not the only to say that tomato is delicious. Scientists claim it too. Besides the four traditional tastes (Sweet, salty, bitter and acid) Japanese scientist Kikunae Ikeda set up a fifth one that he called umami (Japanese word for ‘delicious taste’) . Umamis is present in breast milk, green tea, cheese, aspargus and, obviously, tomatoes. And these last ones are also able to increase the taste of other food.

Food industry has known it for a long time. Aminoacids responsibles for perceiving this taste – mainly glutamate and aspartame- has been isolated for being used as artificial intensifiers. Nowadays, these artificial intensifiers have got a vaery bad press, however researching on their health effects are contradictory.

Nevertheless, why would you wanted to use artificial intensifiers when a pair of good tomatoes is going to get a perfect taste?

Tomato in our kitchen

Organic tomato on its season, or from local producers when we buy tinned tomato, has become in one of our main stars. Obviously it plays a leading role in our Gazpacho, co-starring with fish in our Cod in Tomato Sauce, and it is the guest star of our Pisto with Fried Egg. Three really umami and very healthy choices.

Cheese is one of those things discovered by chance that changed human life -or human diet at least.

10.000, 5.000 years ago, a man or a woman -probably one in each corner of the world- put some milk in a wineskin made from the stomach of an animal, the rennet did its work and voilá: the history of gastronomy changed forever. Stilton, Pecorino, Cabrales, Camembert, Gouda, Feta, Paneer, who could imagine food culture without cheese?

Even when supermarkets are full of substitutes and other heresies created by food industry in the name of progress and developement, good cheese is still produced in a very traditional way, attached to environmental conditions of its area of production. It is the case of La Serena Cheese and all flower cheese in Extremadura.

Flower cheese is made with sheep milk curled by milk thistle, and it is usually the result of a kind of ecosystem: La Serena is a district of Extremadura where there are more sheeps than people, with large open plain lands inhabited by merino sheep and plenty of thistles, where cheese has grown as a solid industry.

Nowadays, the cheese of La Serena has a protected denomination of origin, which proudly states that it is the only Spanish cheese exclusively made with raw milk from Merino sheeps and vegetal rennet. One kilo of cheese needs the milk of 15 sheeps and it is produced in an traditional way, fire-branded to guarantee its authenticity because it implies that the cheese has followed all the quality controls.

Here, in La Tertulia, we serve Tortas de La Serena (D.O), a kind of La Serena Cheese characterized by its creamy, semi-soft consistence, so it is eaten spread on toast bread or biscuits (we usually serve it with homemade tomato jam). Your first impresion could be a bit unpleasant (I’m not gonna lie, it really stinks) but wait to taste it: you won’t be able to forget “its brash, strong and memorable flavors“.

Yes, flavours, in plural, because it has the four of them: sour at first, then a bit salty, a bit bitter, and finally, with a sweet after-taste. A mix that claims for a good wine, maybe a Rioja, but I would choose a Ribera del Guadiana to have a whole symbiotic experience.

Now that you have said cheese, there is only a decision to be made: starter or dessert?